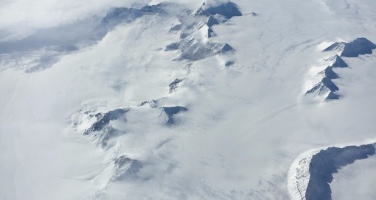 Welcome to Surrogate Cities by Heiner Goebbels, a sound world unlike anything you have experienced before. First performed a quarter of a century ago, Heiner Goebbels portrait of a metropolis forces us to confront our urban dreams - and urban night-mares. Almost Mahler-like in scale, Goebbels work is grounded in the Austro-German musical tradition while blending in elements of jazz, blues, electronics and vocals in a manner that is impossible to classify. 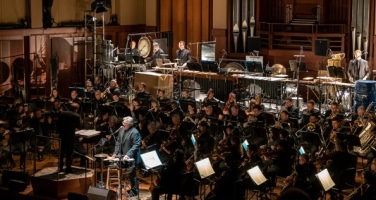 Were Heiner Goebbels only a composer, he would still be one of the most fascinating artists in time. Over the course of a career that now spans more than 40 years, Goebbels has created a body of work in which the idioms of art-rock and jazz mix with those of mid-20th-century modernism, spoken words, quotations from classical compositions and "concrete" sounds – that is, recorded sounds of machines, nature and everyday life. His egalitarian approach to these diverse sonic elements has yielded music that is eclectic and unpredictable in the best post-modern way. 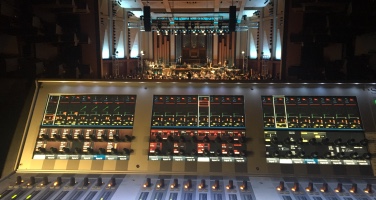 But Goebbels has not confined himself just to composing music, at least as that activity is traditionally conceived. Instead, he has been strongly engaged with theater throughout his career - not as a composer writing music to dramatic texts, in the manner of opera composers, but as a musician speaking to infuse a high degree of theatricality into all his compositions. More precisely, Goebbels has endeavored to blend music and theater in new ways, creating concerts that are as much dramatic events as musical ones, and radio plays that are as much musical compositions as
theater pieces. 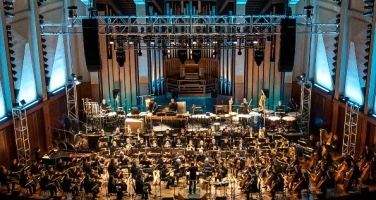 In 1994, Goebbels composed his most ambitious orchestral work up to that
time. Scored for large orchestra, mezzo-soprano, speaker and digital sound sampler, Surrogate Cities was conceived, the composer said, as "an attempt to approach the phenomenon of the city from various sides, to tell stories of cities, expose oneself to them, observe them; it is material about metropolises that has accumulated over the course of time." 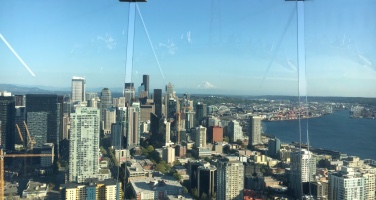 Using texts by Heiner Müller, American novelist Paul Auster and Irish writer Hugo Hamilton (whose novel Surrogate Cities gives the piece its title), the work examines its subject from different perspectives and using varied musical ideas and materials.
Among the latter are sounds of urban life recorded, altered and played on a digital sound sampler.

The Surrogate Cities concert in Zagreb took place in a kind of old socialistic concert place. The challenge here was to perform with only one general rehearsal..., at the end it was a miraculous live mix session and should be annual accounting operation for all sound director students. It is to observe that the mixing desk operates only for
some hours during general rehearsal and concert, but not during the preparation time.

Seattle was a perfectly prepared sound system with elements from L-acoustic and D&B audio. The hall itself was one of these rather “over acoustic places” with balconies on the side and rear and a main loud speaker system that was flown a bit to high due to the balcony areas. 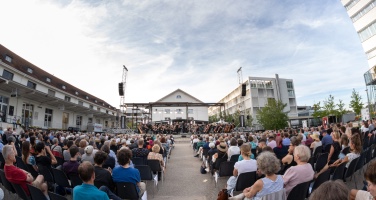 Basel was the first time Surrogate Cities was performed out door. The orchestra was set up on a cement platform with out roof, so a really free field sound situation. If the first annual accounting operation for sound directors was in Zagreb, here was definitely the second one.
The PA system came from Clear Brothers, a positive good experience also for orchestra sound. 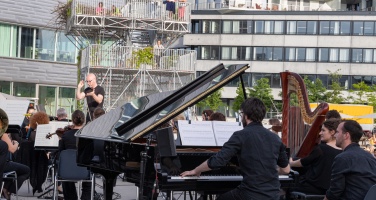 After the concert in Seattle, the Classical Voice North America wrote:
”When pace and volume increased, there was so much going on that it was impossible to tell what was amplified and what was acoustic”.

Following the concert in Basel, a professional sound mixer with many years of orchestra work resumed: “... thank you for that wonderful outstanding orchestra mix ...”. 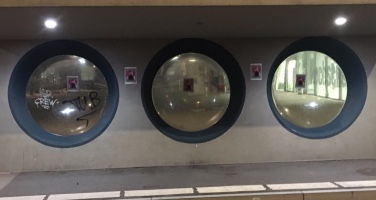